Wonder Woman 1984 has brought its message on the importance of truth onto screens worldwide. With retro stylings and a Hans Zimmer score, the second installment in Diana Prince’s story shows a more mature Amazonian who has adapted to man’s world and her solitary life, developing her skills as a superhero and her ability to keep out of the limelight. 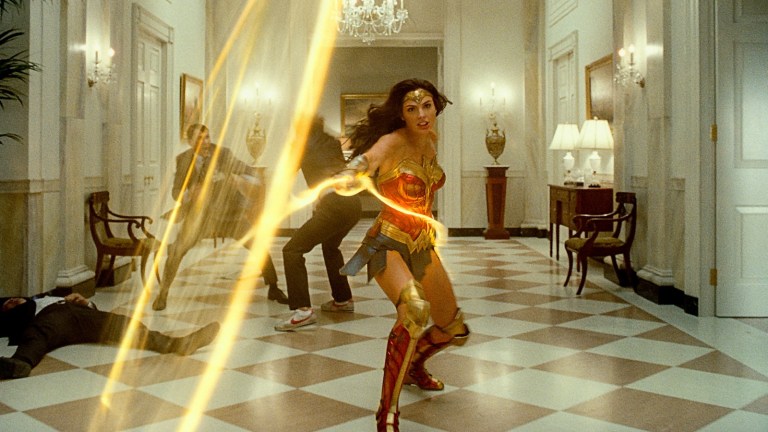 Wonder Woman 1984 takes place well before the introduction of the other heroes of the DCEU and largely exists as a standalone film. However, there are still plenty of references to Diana Prince’s own history across the comics, small screen, and previous films.

We’ve used all the wisdom of Athena to chronicle as many Easter eggs as we can spot, but as always, if we’ve missed anything, do let us know in the comments. Let’s get into it.

This offers our first look at Diana’s skills as a kid, especially archery and horseback riding, two of her signature abilities. The girl playing 10-year-old Diana here is the same actress as last time, Lilly Aspell. She’s excellent, and really did all of this great action work – only the log that comes swinging above her head is CGI.

Lindy Hemming, the film’s costume designer, told a group of reporters including Den of Geek that, “They’re in their triathletes suits, 2000 or however many years ago version of their Speedos really. We’re saying, design-wise, that they’re made of leather and that, in honor of the golden-ness of the games, and this golden theme really in this film.”

When can we go back to Themyscira in the present? At the end, when Diana is flying and the air clears, I briefly thought Diana was headed back and yes please!

There’s a photo in Diana’s apartment that shows her liberating a concentration camp during World War II with Etta Candy, so while Diana seems to be staying out of the limelight, she’s not sitting on the sidelines.

In addition to their great relationship in the previous movie, in the comics, Etta and Diana worked together frequently, including at ARGUS, so this kind of team-up is a natural fit. Another photo shows Diana with an older version of Etta in New York. Etta would likely be in her late 80s or early 90s in 1984, so it’s likely that she’s no longer with us. Pour one out for a real one.

While there have been no fewer than four Cheetahs in the comics, Barbara Minerva is the main one and one of only two who has actual powers. Cheetah is one of Wondy’s great foes in the comics, a frenemy and a vicious eater of human flesh! For a while she’s worshipped like a goddess in the jungle in the fictional African nation of Bwunda. She’s, uh, a little different here. There’s usually at least some element of Barbara asking for powers or a better life as well as the “be careful what you wish for” element where key information is withheld about what being the Cheetah will really mean.

In a sign of Diana’s very specific brand of feminism, Barbara makes a comment about scientists not wearing heels and Diana responds that in fact, they do, since she’s a scientist and she’s in heels. In the 1980s as women entered and stayed in the workplace at unprecedented levels and reached new heights in their careers, most workwear trends like big padded shoulder blazers were focused on blending into what was presumed to be men’s spaces, rather than standing out or taking over the space. Since she grew up on Themyscira, Diana has less of that cultural baggage.

Let’s go to the mall!

“The way we’re telling these Wonder Woman films, she’s got emotional stakes pretty quickly so the thing I kept saying to the studio and everybody was, after ending the first movie, I’m craving that Spider-Man-like moment where you’re just delighting in your superhero at their best. A lot of superhero movies have those moments at the three-quarter point because they don’t have big emotional stakes, so how they beat the villain is how you get that.”

She continued “I needed there to be that badass, flying around [sequence] – I always loved that part of the Spider-Man movies.”

The first (and perhaps most likely of these two unlikely connections) is a Colonel Koslov, who took on Superman and Batman in the pages of World’s Finest in 1970. This Koslov was the military leader of a fictional Eastern European country called Lubania.

The other is a former boxing opponent of Ted “Wildcat” Grant who appeared in a single issue of The Brave and the Bold when Wildcat teamed up with Batman.

Is it just us, or would that vault in the back of Koslov Jewels have made a great opportunity to tease obscure stuff from other ancient or mystical corners of the DCEU like the Rock of Eternity in Shazam, Atlantis from Aquaman, or magical things that will appear in the upcoming Black Adam movie (such as Dr. Fate’s helmet).

Ironically, in the comics Steve was once meant to be used as a vessel to bring back someone else’s spirit, the malevolent plant god Urzkartaga who bestowed Cheetah’s powers upon her. Luckily, Wonder Woman helped Cheetah see the light and they stopped Urzkartaga from sacrificing Steve and taking over his body.

Steve mentions not knowing where he was, but he knew it was somewhere nice, so that implies he could be brought back again, right? Here’s hoping.

Aerobics! Pay phones! Stationary bike! Watching the wall of TVs in a store window! There are plenty of nods to 1980s culture throughout this film.

Sadly Steve’s navy outfit is not a jumpsuit but possibly a Members Only jacket and swishy pants, which is very 80s and we stan.

Rock the Casbah, I guess

As always, it is DEEPLY uncomfortable to watch Gal Gadot in any Arab and/or Middle Eastern context – put down those kids Gal!

This is where things get even more hairy. In the comics, it’s an arid desert and the geography we’re given is “north of Iran and Saudi Arabia” which doesn’t really make sense. It would need to be carved out somewhere around Iraq or Syria (which would be North of Saudi Arabia and west of Iran) or perhaps eastern Turkey. Instead, we see the border spring up disruptively in Egypt, seemingly in the heart of Cairo. That puts at least part of Bialya on the Africa continent in an arid desert. That fits since Libya under Qaddafi seems to be an inspiration, but in this world does Bialya have the Suez? Does it go up into the Levant or stay in Africa? Basically I have a lot of questions.

Asteria and the Golden Eagle Armor

This film provides a really lovely new backstory for the golden eagle armor of the comics (we dug in deep on the comics history of the golden eagle armor here). In the film, the armor is first worn by Asteria, who had to hold back the men while the rest of her Amazon sisters escaped to Paradise Island. It’s made up of pieces of the other Olympians armor, all given to her to help her in her sacrifice.

During a set visit, Hemming said of the wings, “They become like Roman shields. So she’s protected. I won’t give away the story of why that’s the kind of protection she needs. But basically her fighting style is with the shields. So I’m really pleased now because I think that there was no logic to being a pair of wings, really. But there is a logic to being something she can glide in on.”

Agree to disagree on the logic of nonfunctional magnificent gold wings, Lindy, but fair point. Diana used to wear this armor when she was vulnerable, or facing a particularly strong enemy – ironic that she uses it once she regains her full strength. Although, Barbara is meant to be equally powerful, at least after the first wish, and then gets more, so maybe she still needed it. She was definitely on the defensive for a while there.

The invisible plane is nearly synonymous with Wonder Woman. Whether you watched the old Lynda Carter show or grew up reading the comics, the invisible plane has been around since 1942 and had the same creator, good old William Moulton Marston. The invisible aircraft was a necessity because like the Diana of the big screen, comic book Wondy couldn’t fly until the mid-80s (Crisis on Infinite Earths).

While Diana’s plane in WW84 seems to be normal in every way except invisibility, in the comics it could fly 2,000 miles an hour when it was first created. The jet only got faster as the decades went on, up to 40 miles per second, which is 144,000 mph. In the old William Moulton Marston days it was equipped with a “mental radio” so Wondy could receive telepathic distress calls (or send them) from Paradise Island.

Around the 1950s there was an upgrade and it became an invisible jet, specifically. It can go to space, go completely undetected by RADAR, and a more recent version of it is actually sentient and shape-shifting and went by the name WonderDome.

Here we see Diana use her own will to make the plane invisible, which is quite similar to the original origin story of the plane in the comics, rather than the more recent one. The comics version of the plane could send out rainbow rays to penetrate the mist around Themyscira and allow Wondy to fly back home. The fireworks may have been a nod to that in addition to a great visual device for the invisible jet (rather than the adorably hoaky image of Lynda Carter sitting in a plane outline while clouds scroll by). It  could certainly be a possible route home for her in the future.

This is another one where the image of Lynda Carter’s Wonder Woman has imprinted itself so thoroughly on the collective consciousness that people who have never seen the show have still seen her fly through the air.

This visually arresting new power is likely derived from the fact that Zeus, god of lightning, is her father in some tellings of her origin. In the New 52 era of the comics, Diana gained the ability to manipulate lightning, expel it, and use it as a weapon, with help from her bracelets. Since they were made from the Aegis, an Olympian artifact will get into below, they were both indestructible and helped her harness something of the divine.